Last week, in our interview with NIWA’s Dr Rob Bell, he discussed how the combined effects of King Tides and stormy weather can be disastrous.

Unfortunately, these synergistic effects were experienced in the Marshall Islands in the early hours of Monday morning (March 3rd) when the impact of a King Tide was augmented by stormy weather. The tidal and weather conditions caused storm surges, inundating part of the capital, Majuro, and some of the outer islands with 1-2 feet of salt water. 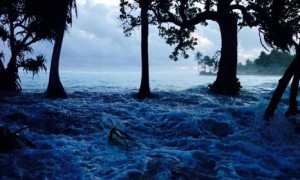 A state of emergency was declared and hundreds of people were evacuated, around 70 homes were badly damaged or destroyed and countless others were flooded. Sea walls and fencing were knocked down and roadways suffered damage from the flooding and waves. Thankfully, no one was seriously injured.

As sea levels change, the Marshall Islands – a group of atolls, islets, and small islands lying halfway between Australia and Hawaii – and many other low lying islands in the South Pacific are at an ever-increasing risk of inundation and flooding. Assessments made by the Intergovernmental Panel on Climate Change (IPCC) reported that:

“Many small island states—especially the atoll nations of the Pacific and Indian Oceans—are among the most vulnerable to climate change, seasonal-to-interannual climate variability, and sea-level rise.”

The low elevation and small size of many Pacific Islands makes them especially vulnerable to partial or – worst-case scenario – total inundation by changing sea levels.

As the sea encroaches further inland: shorelines will be drastically altered; saltwater intrusion may contaminate freshwater supplies and render soil unable to support food crops; and the risk of flooding and surges during storms will increase. 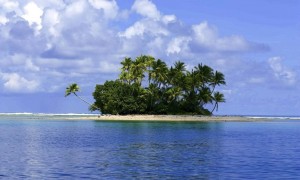 Low-lying Marshall Islands like this one are at risk of being swallowed by rising sea levels. Image: Christopher Michel on Flickr – reproduced under Creative Commons 2.0

More than half of Pacific Island residents live within 1.5 km of the shore and the majority of critical infrastructure, such as roads, utilities, and airports are located along coastlines. This means the physical and ecological impacts of changing sea levels will also affect traditional and cultural practices, as well as the health and socio-economic wellbeing of those living in Pacific Islands.

Tourism is the main employer and contributor to the economy of many small islands, along with commercial fishing and agriculture – all of which will be impacted by sea level rise.

Many small islands lack the infrastructure, and natural, human, and economic resources to deal with the forecasted effects of sea level and climate change. The Marshalls and other islands, such as Tuvalu, Kiribati and Tokelau are already experiencing erosion and significant land loss.

As sea levels continue to rise – potentially by up to 1 metre globally by 2100 – many areas will become uninhabitable, displacing people, communities, and entire islands.

Sadly, small island states in the Pacific account for less than 1% of global greenhouse gas (GHG) emissions, yet they are among the most vulnerable to the effects of changes in sea levels and climate.