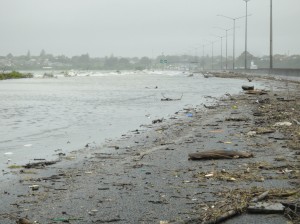 Photo showing the effects of the combined King Tide and Storm Surge event on State Highway 16 (North-western Motorway). The event occurred in early 2011 and had widespread impacts on coastal infrastructure and property around the upper North Island. Photo Credit Auckland Transport.

King Tides are naturally occurring and predictable events. However, the severity of a King Tide can be influenced by local weather and oceanic conditions. If a King Tide occurs during a storm, water levels can become so high they have the potential to cause damage to areas of coastline and property.

Apart from providing us with great photo opportunities a King Tide can act like a crystal ball, allowing us to glimpse into the future and see what Auckland’s coastline may look like in years to come as a result of sea level rise.

In the not too distant future, daily high tides might be as large as the King Tides we experience now. Not only does this mean less space for your beach towel; entire beaches, walkways, roads and buildings could disappear and many coastal-dwelling species – humans included – could have their habitats affected.

We need your help to photograph King Tides so we can raise awareness of the potential impacts that global sea level rise might have on our local coastal areas. Your images will become part of a living record that tracks changes to Auckland’s coastal areas over time and provides scientists, government authorities, businesses and individuals with vital information to help us plan and prepare for the future.

Check out the Next King Tide page to see when you can join in on capturing the future.

Wanting to get involved?