On Wednesday 13 August 2014, the King Tides Countdown was held at the Beca Auckland Office Auditorium in Auckland City.

Members of the King Tides AKL team broadcasted live stream and real-time photo images of King Tide hotspots from Auckland’s CBD during the count down to the King Tide at 9:31pm. 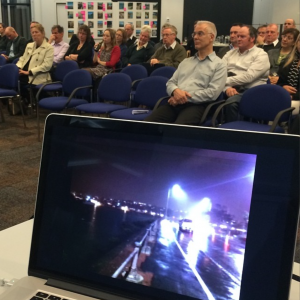 As the countdown approached, we heard from experts from NIWA and Civil Defence, to get some context of the king tide that was witnessed.

“The anatomy of a coastal storm-tide”

Coastal flooding and erosion can wreak havoc when high-tides, storm-surge and large waves occur together. The sea invaded Auckland properties and closed motorways during a high storm-tide in January 2011. At Easter this year Tamaki Drive and neighbouring properties were flooded by large waves at high tide. Red alert! This week, Auckland will experience its highest “king tide” in more than 18 years. Scott explains tides and what makes a king tide, how storms drive the sea-level up, and why we must be extra watchful when storms arrive during king tides.

“The Rising Challenge: Are we up to it?”

Sea levels have been slowly rising “in the background” since the 1800s, but are projected to accelerate to upwards of a metre by the end of the century. Such a rise, along with other direct and in-direct impacts, will mean our lower-lying coastal and harbour margins will drastically change as we respond to rising seas and more frequent coastal inundation events. Rob updates the situational analysis for NZ coasts and the challenges that lie ahead.