The levels of earth’s oceans are not uniform and they can vary quite markedly over time as the planet goes through different cycles. For the last 15,000 – 20,000 years the earth has been going through a warming phase where the ice sheets and glaciers have been melting, resulting in the planets sea levels rising.

What causes sea levels to rise?

There are two primary processes that lead to sea level rise and both are induced by climate change:

How much will sea levels rise?

Measurements show that the global average sea level has risen by 19 cm over the past century and the rate at which sea levels are rising has increased in the last 20 years. It is projected that by 2100 global sea levels will rise by 26 cm – 98 cm and by 1 – 3 metres or more by 2300. Read more about global sea level rise here.

Locally, sea levels have risen around 16 cm over the past 100 years. Measurements taken from the Port of Auckland tide gauge show an average sea level rise of around 1.6 mm per year since 1899. 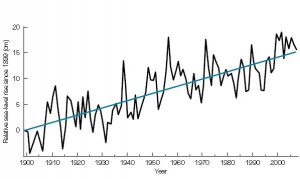 Fig 1. Relative sea level rise at the Port of Auckland tide gauge since 1889. The blue line represents the overall trend between 1899 – 2007. Source: Ministry for the Environment https://www.mfe.govt.nz/publications/climate/preparing-for-coastal-change-guide-for-local-govt/html/page1.html

How will rising sea levels impact our coastal areas?

Auckland lies between two harbours and is surrounded by 3100 kilometres of coastline. Many people live and work in close proximity to the coast and much of the regions early development, such as downtown Auckland, the Port and major roads occurred on or near reclaimed land.

Urban development and infrastructure as well as wildlife habitats located in coastal areas may become more vulnerable to hazards such as coastal inundation (flooding) and erosion due to rising sea levels. These risks are further increased during storm events where sea levels become even higher due to “storm surge”.

Because sea levels are predicted to continue to rise, we need to begin planning for these future impacts now in order to safeguard our environment and built infrastructure for future generations.