In the first part of our interview with Dr Rob Bell, Programme Leader: Hazards & Risk at NIWA, he informed us that in the near future – potentially in just 40 years time – we could be experiencing tides as high as the recent King Tides on a fortnightly basis.

Countless images of the February King Tides show flooding of roads, cycleways and land. The novelty factor of driving and cycling through nearly knee-deep water was obviously fun for many, but the novelty will wear thin rather quickly when this becomes a regular occurrence in the near future. Unless kayaks and paddle boards become the new mode of transport – something will need to be done to adapt to these higher waters. Higher sea levels also increase the risk and severity of storm surge and flooding – another good reason to start acting now to protect our coastal areas and communities.

A paddle boarder takes advantage of the flooded cycleway along the North Western Motorway during the King Tide, 02 February 2014. Photo Justin Watene

Here, in part two of this interview, Dr Rob Bell explains how storms, climate change, and sea level rise could impact our coastlines and why your photo contributions of King Tides are a valuable resource for scientists.

Lots of the King Tide images that Aucklander’s shared with us show people enjoying the novelty of the unusually high tides – like paddle boarding on flooded roads.  How different might peoples’ experience have been if the weather had been stormy?

It would have been very different. Auckland had a taste of this on 23 January 2011 when a high spring tide coincided with a low-pressure system that moved down from Northland with strong onshore north-easterly winds, creating an additional 60 cm rise in sea level in Auckland above the predicted high tide that day. The event caused substantial coastal inundation in places like Maraetai Beach, the NW Motorway causeway and Herald Island.

If this same 2011 storm had occurred on the February 2014 king tides, the coastal flood levels would have been another 17 cm higher than it was in 2011. However there is a low probability of a severe storm combining with a very high king tide, but it is entirely possible at some stage.

This is why NIWA publishes a red-alert tide calendar, which provides a heads-up on dates of very high tides well ahead of time so coastal managers and Civil Defence personnel can keep a close eye on weather forecasts.

That’s an alarming thought, but great to know that NIWA are keeping us well informed so we can be prepared if a severe storm hits.

Speaking of bad storms, it is projected that due to climate change, some areas will experience changes in the frequency and severity of storms – do we know what the future storms might be like in New Zealand?

From NIWA’s research so far, there is likely to be only modest changes to wave heights and storm surges due to climate change by 2100, but while the frequency of storms may be similar, the extreme storms may become more intense.

How will rising sea levels influence the effects of these storms?

Tides, storms and tsunami all ride on the back of the sea level present at the time they occur – so as sea level rises, it will lift all of these coastal processes by an equivalent amount. This poses a problem for already-developed coastal margins that have been planned and designed to tide levels experienced historically over the past century.

New coastal development provides an opportunity to ensure there is sufficient coastal buffer to absorb further increases in sea level, given sea levels are projected to continue increasing for several centuries.

We encourage people to visit and photograph King Tide events around the Auckland region. How will the images that people capture of King Tides in their local areas aid scientists?

These photographs will be very useful for raising public awareness and in providing training opportunities with practitioners on the situations that arise during king tides – as a precursor to conditions that will be experienced more commonly later this century.

Photographs also provide a visual indication of the water levels reached over a wide range of locations, that can be used to verify storm-tide and wave inundation models used by scientists to assist planners, hazard managers and coastal communities better understand the present-day and future risks

Thank you so much for sharing your expertise with us Rob.

If you’ve got more questions about King Tides find out more here and don’t forget to check out the latest photos on our website and instagram to get you inspired for the next King Tide events on the 2 -3 March. 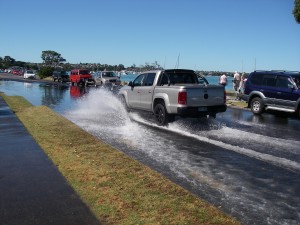 Flooding on The Parade in Bucklands Beach during the King Tide, 02 February 2014. Photo John Spiller