Citizen Science – February’s King Tides were some of the highest this century! NIWA’s Dr Rob Bell gives us the stats of the King Tides

Earlier this month – like gazing into a climate crystal ball – the King Tides gave us the chance to witness what everyday tides might look like in the future as a result of rising sea levels. The unusually high tides made for some great photo opportunities and the fantastic images that many of you shared with us have become the first addition to an important living record – providing valuable information about how sea level rise could affect us. 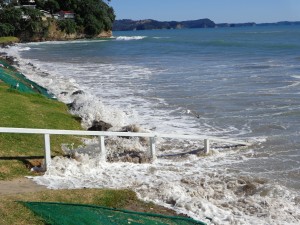 Along with all the keen photographers, scientists too were keeping a close eye on the King Tides. We spoke to Dr Rob Bell, Programme Leader: Hazards & Risk at NIWA, who filled us in on the finer details of the recent King Tides and what we need to be wary of for the future.

What was the average increase in height of the high tides in Auckland during the first weekend of February?

The 1-2 February king tides in Auckland were about 40 cm higher than an average spring high tide that normally occurs just after New or Full Moon and similarly, the low tides were much lower than average spring low tides by around 20-30 cm.

How do these King Tides compare with previous ones over the past decade and century?

The January and February 2014 king tides were some of the highest tides in the past several years – which go in cycles related to nuances in the Moon and Earth orbits.  The predicted February tides were only around 3 cm less than the biggest king tides of the last 80 years on January 11, 1974 and January 29, 1948 – excluding any weather-related effects.

As sea levels continue to rise, will the average height of King Tides also increase?

Yes, all the different tide levels (e.g. spring, neap or king tide levels) will be progressively lifted up by the rise in sea level as the tides ride on the back of the mean sea level – especially on the open coast and in deeper harbours.

However, the tide range may change in future in shallower estuaries and tidal creeks, depending whether sedimentation on the sea bed keeps pace with sea-level rise, or if not, these water bodies will become deeper, which could alter the tidal regime.

King Tides can provide us with a glimpse of what our coastlines may look like in the future. When can we expect our everyday tides to be as high as the King Tides we recently experienced?

For Auckland’s east coast, a sea-level rise of only 40 cm will be all it takes for the present-day water levels we saw on the 1-2 February king tides to occur regularly on the average spring tides each fortnight. Further at that stage, the less frequent king tide levels will be another 40 cm higher again and will cause further inundation of low-lying areas that may in the past have been rarely flooded by storm-tide events.

Sounds like we’ll be in deep water sooner than most people realise. Thank you for answering our questions Rob, we look forward to hearing more from you later in the week.

Tune in this Friday for the second part of this interview, where Dr Rob Bell discusses what sea level rise, climate change, and storms might have in store for Auckland’s coastline and how your King Tide photos can contribute to science.