MORE SUBTLE THAN A TSUNAMI

The passage of a single year is but the merest blink of an eyelid when talking of king tides as the harbinger of potentially destructive rising sea levels.

But 2014 nevertheless proved a massive year for the King Tides Auckland Initiative (King Tides AKL), which began ringing the bell on how sea level changes could impact coastal home owners, businesses, and environmental hot spots and their wildlife.

With support and backing from groups like Auckland Council’s Auckland Civil Defence & Emergency Management and Coastal Services Management team, KingtidesAKL has enthused thousands of Aucklanders to join a ‘citizen’s science’ initiative to take the first step in the long haul of documenting the effects of rising sea levels on the city and its environs.

KingtidesAKL organised events at Takapuna Beach and Silo Park during king tides in February and March 2014, events which were highlighted on national television, radio and in metropolitan and local newspapers. 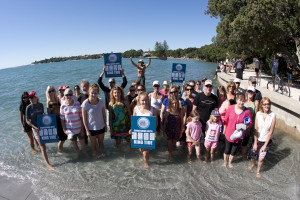 More importantly, the events helped mobilise ordinary people across the isthmus to get out with their cameras, and capture for posterity the impact of those king tides on beaches, walkways and cycleways, and even major Auckland coastal roadways like Tamaki Drive in the upmarket eastern suburbs.

And on August 12 last year, when the highest king tide of the year kicked in at 9.31 in the evening, KingtidesAKL broadcast live streams of flooding in the CBD to a special function at Beca’s Auckland auditorium in Pitt Sreet. Beca, a professional services agency, backed this KingtidesAKL initiative in conjunction with the New Zealand Coastal Society. Event participants voted for the King Tides AKL photo competition finalists, and heard from experts from NIWA and Civil Defence. The public wasn’t to miss out, as the King Tides AKL team had designated photo and video areas set up at “hot spot” locations around Auckland where the public could witness the King Tide using the King Tides AKL social media platform. 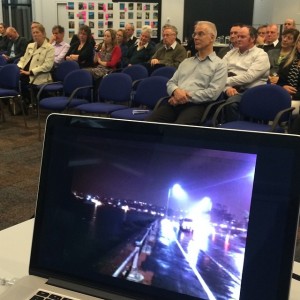 Through the events of 2014, thousands of photos taken by ordinary but concerned citizens have been uploaded on the KingtidesAKL Facebook and Instagram page, and many have subsequently been posted on galleries on the website www.auckland.kingtides.org.nz.

Rising sea levels are more subtle by far than a tsunami. NIWA and Auckland Council coastal scientists want us to get our heads around what sea levels may be like, not next year, but next century and beyond. And that’s no easy thing. Sea level rise has a slow-burning fuse, and decisions likewise need to be made over a long time.

The photos that were taken and posted on social media sites, and on the KingtidesAKL website last year, will provide the base line of an unfolding visual panorama of how sea change will impact our living space, and more importantly, the living space of our children and grandchildren, and suggest ways we can adapt to that change now.

And what is encouraging for KingtidesAKL is that, one year after start-up, awareness and adaption is already under way, both initiated and underscored by their actions.

In February, when television stations wanted footage for news bulletins ahead of the first king tide of 2015, they broadcast film shot in February the previous year on the cycleway which runs alongside the north-western motorway between Point Chevalier and the Te Atatu Peninsula. The pictures were of the cycleway under water at the height of the king tide, of cyclists shouldering their bikes and wading towards dry ground, of paddle boarders making different sport of the fully submerged cycleway. 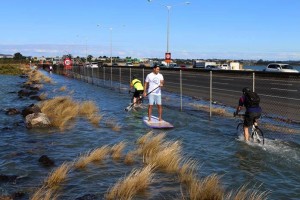 A paddle boarder takes advantage of the flooded cycleway along the North Western Motorway during the King Tide, 02 February 2014. Photo Justin Watene

But in 2015, the cycleway was well above water. It was not just that this year’s February king tide was not as high as the year previous. NZTA, aware of cycleway flooding problems even before the 2014 king tide, had acted in the meantime to raise the level of the cycleway. So, dated photos can tell a story of progress, and give point to the happy snappers who download the impact of high tides at their local beach, or favourite wildlife spot.

Also in February 2014, a photo was downloaded by a KingtidesAKL enthusiast of the flooding of a walkway which ran under a Riverhead vehicle bridge which crossed the upper reaches of the Waitemata Harbour. KingtidesAKL was able to send the photo on to Auckland Council local parks, which subsequently placed signs by the walkway, warning walkers to beware at king tides and other times of flooding. Evidence of a constructive Community-Agency relationship at work.

As a result of KingtidesAKL events and photos downloaded onto web and social media sites, people have identified potential flooding hot spots, which reinforces Auckland Council’s spatial information on coastal inundation zones. It may be that the coastline at the southern end of the beach will have to be realigned in future years or other hard infrastructure options considered, with implications for the Orewa surf club.

At Bucklands Beach in the south eastern suburbs, photos highlighted that king tides raised the sea level to the point they run up into storm water drains, creating overflow further back in streets and on walkways. 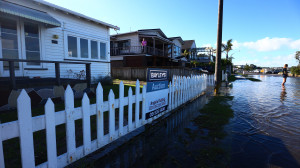 So a beginner’s year for King Tides Auckland. But a big year too. Not tsumai-like, but subtle and slow-build, much like the very issue (sea level rise) they seek to confront with hands-on science, common sense and the good will of ordinary people who realise their future lies in their own hands, in this issue as in most others.

It is also a good demonstration of the maxim oft-quoted in environmental and ecological contexts – ‘think global, act local’.

Aware of the international king tides movement in the United States especially, but also Canada and Australia, King Tides Auckland founders Ben Sheeran and Justin Watene saw its natural fit for a country like New Zealand, and a city like Auckland in particular.

They discovered the concept was being explored independently by Auckland Council’s Coastal Community of Practice programme, facilitated by the Coastal Services Management Team. A meeting of minds means that the initiative now has firm council support.

King tide events have already been planned and executed in 2015. There will be 15 king tides in New Zealand this year, many more than last year. And so too, plenty of opportunities to photograph what may too soon become touchstones of a bad past, and pointers to a better future. Will grumpy cyclists shouldering their machines, and gleeful paddle boarders gliding in between, become the touchstone image of what once we were? 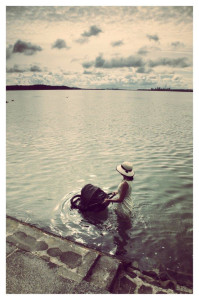