Adapting to sea level rise: Check out some amazing ideas for fortifying the future

Sea level rise may be indisputable, but that doesn’t mean we can’t adapt to living with higher oceans – humans are pretty resourceful, after all.

Coastal erosion and flooding – due to rising seas – threatens houses, buildings, roads, infrastructure, and wildlife habitats. The current methods for keeping the sea at bay are based on either hard engineering, using man made structures; or soft engineering, based on ecological principals. 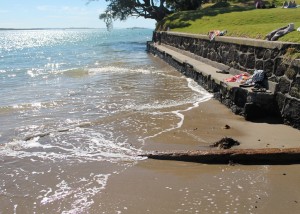 Examples of hard engineering include: concrete sea walls; ripraps (shoreline barriers made from rocks and other materials); and offshore breakwaters (boulders or concrete blocks sunk offshore to dissipate the energy of waves before they reach the coastline).

Soft engineering utilises the natural buffering effects provided by tidal marshes, wetlands and other coastal ecosystems to reduce the impacts of flooding and erosion. These natural systems are restored, replenished or stabilised using techniques, such as beach drainage (which results in sand build-up by pumping seawater from underneath the beach) and managed retreat (areas are allowed to flood and erode naturally), which encourages the formation of tidal marshes, wetlands and beaches.

Both methods have their upsides and downsides. Hard engineering tends to be expensive, unsightly, and is often only a short-term fix. Whereas soft engineering is a longer-term, more sustainable solution, that also has additional ecological benefits. However, soft techniques may not be as effective in extreme storm events.

With the need for protecting our coastlines becoming ever more apparent; designers, architects and engineers are coming up with some ingenious ideas that combine the best of man-made and natural defenses to safeguard our shores. Here are a few cool designs we’ve come across – that are both aesthetically and ecologically pleasing – that might allow future cities to adapt to rising sea levels 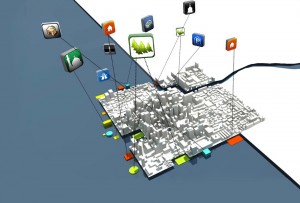 Rather than barricading cities from the oceans, Waterstudio.NL  imagines floating cities that rise along with the seas.

City Apps, “are floating urban components that add a particular function to the existing static grid of a city.” These Apps will range from floating carparks through to apartment complexes, energy plants, and entire islands.  There are numerous floating structures designed by Waterstudio.NL already in existence, such as watervillas, exhibition centres, and floating restaurants. 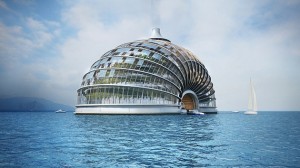 Looking more sci fi than biblical, The Ark Project, is a bioclimatic, completely self-sustaining building powered by solar, wind, and thermal energy and it can be built on land or sea. The 14,000 square metre “Ark” concept boasts a lush – extensively planted – green interior and will be able to withstand floods and other natural disasters. 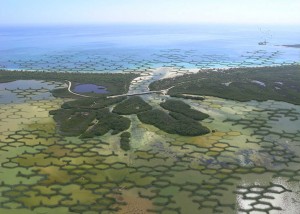 Hungarian based art and design collective, Szövetség’39, created CALTROPe as a concept to protect delta areas from flooding and erosion due to rising sea levels.

CALTROPe – which was designed in collaboration with divers and scientists – is a tubular framework that provides protective housing for young mangrove saplings as they grow to form a mangrove forest, which acts as a natural buffer against erosion and also dissipates wave energy reducing the impact of flooding.  The protective framework is made from a mixture of materials that will slowly degrade and crumble away after 15 to 20 years – enough time for the mangroves to grow strong enough to support themselves – and become part of the sediment. 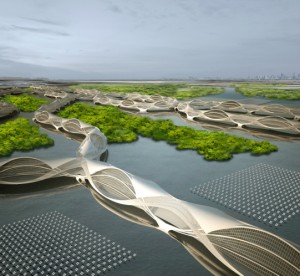 A Post Diluvian Future is a conceptual community inspired by the centuries old tradition of flood-conscious architecture in Thailand, but re-imagined into a modern, sustainable, “Wetropolis”.  The Post Diluvian (meaning after the floods) community is a future vision for Bangkok’s metropolitan areas and will encompass all aspects of a functioning urban environment, including utilities, schools, public spaces and industry. All built to survive the impacts of future sea level rise while allowing for mangrove and habitat restoration.

Perhaps these designs are a glimpse of what our coastal cities may look like in the future.

There is a plethora of amazing ideas out there with the aim of enabling future generations to cope with sea level rise. In the mean time, however, we need more urgent solutions to protect what we have now.  You can help designers, architects, and engineers come up with clever ways to safeguard our coasts, by showing them what conditions they may be up against.  Help us document King Tides and see how our future shorelines might be affected by sea level rise, find out more here